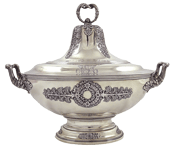 The Castrol Cup (Men’s gross) was won by Patrice Guiader with 27 points. The Ladies’ gross cup – the Financial Times Spring Cup – was won by his wife, Karine Rupe-Guiader, who also scored 27 points. The net Spring Cups were won by Véronique Guermonprez and Roland Leguené with 37 and 40 points respectively. Roland also won the longest drive for the men. Solena Person won the ladies’ longest drive. Due to a mix up at the secretariat the “Nearest the Pin” competition was a mixed event instead of the usual Men’s and Ladies’ individual event. This very first (and last) version of the event was won by Claude Jacques.

Read on for the full results.

Overall Autumn Vase winner (for the highest nett score of the day) was Véronique Deschênes (41), who was also the 1S Ladies' Champ. (Declan Thiriet's 43 could have won him this, had he been present!)
Véronique Gardes-Sol (39) was the 2s Ladies prizewinner.

For the Gross, Dimitri Ansart again won the Men's Gross by a country mile with a neat par (36 points); Véronique Deschênes with 30 was also the leading Lady, but since in the Autumn Vase the Nett beats the Gross, the prize went Karine Rupe-Guiader with 28.

James Moore missed a hole in one at the 9th by 80cm, so won the Nearest the Pin prize instead of buying everyone drinks! Ten times further away at 8m was Véronique Deschênes.

Sue Hall's usual monster driving served her in good stead as she (yet again won the longest drive on the 6th. The Men's long driver missed out by being absent, and shall remain forever anonymous.

Click here for the full results from the FFG.

See the attached for the Gross and Net results (or see them on the FFG site). As usual the Lavelles 'done good', picking up two first prizes! Together with James Moore, Patrick and James achieved a nice one-two in the 2nd Series (Net) Men; James was 1st in the gross. Alex Murphy featured well, coming second in the 1st Series gross and equalling Alison's 35 net (the highest SAC score) to come third in the 1st Series Net. For GolfBag, the highlight of the day has to be Dimitri Ansart's Gross and Net 36 - well with a handicap of -.3, "c'est normal!"; considering how practically everyone else struggled with the wind, an excellent effort - 2 birdies and 2 bogies for a nice clean card! One wonders where his drive on the 6th was, since it wasn't the longest on the fairway (223m is only half way to the hole), but still one of Dimitri's birdie holes!

There are a limited "invitations" available for a modest charge: 25 Euros per person plus the competition fee of 10 Euros. If you would like to take advantage of this opportunity to join participate in this event, please let Sue Hall know quickly together with your preferred time slot.

Read on to see the start times grabbed off the FFG site
Read more ...