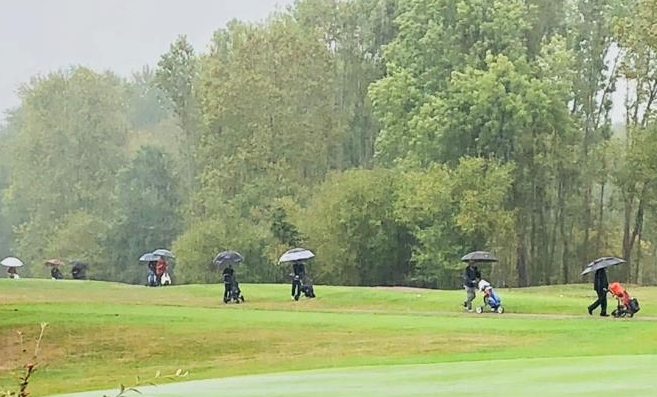 20+ golfers had a great time this last weekend at the Golf de l’Ailette. The outing was organised by Claude Jacques who managed to keep the weather under control for the first two days.

The course was very challenging and long with some diabolically difficult pin positions on tricky greens.

The Ladies’ competition was won by Jeanne Delacroix with 36 points, followed by Jenny Pratt and guest Caroline Icart with 34 and 33 points respectively. Caroline won the Dean Trophy for the best gross score.

Unfortunately, the huge and prolonged downpour on Sunday forced everyone off the course but everybody managed to complete at least 12 holes, so not a total washout.

We enjoyed good food (accompanied by a few alcoholic beverages) and service both at the Clubhouse and at the very comfortable hotel, which was less than a mile away from the course.

Our first outing to l’Ailette must have been well over 10 (if not 15, some may say even more) years ago. I don’t think we will be leaving it that long again before we return.